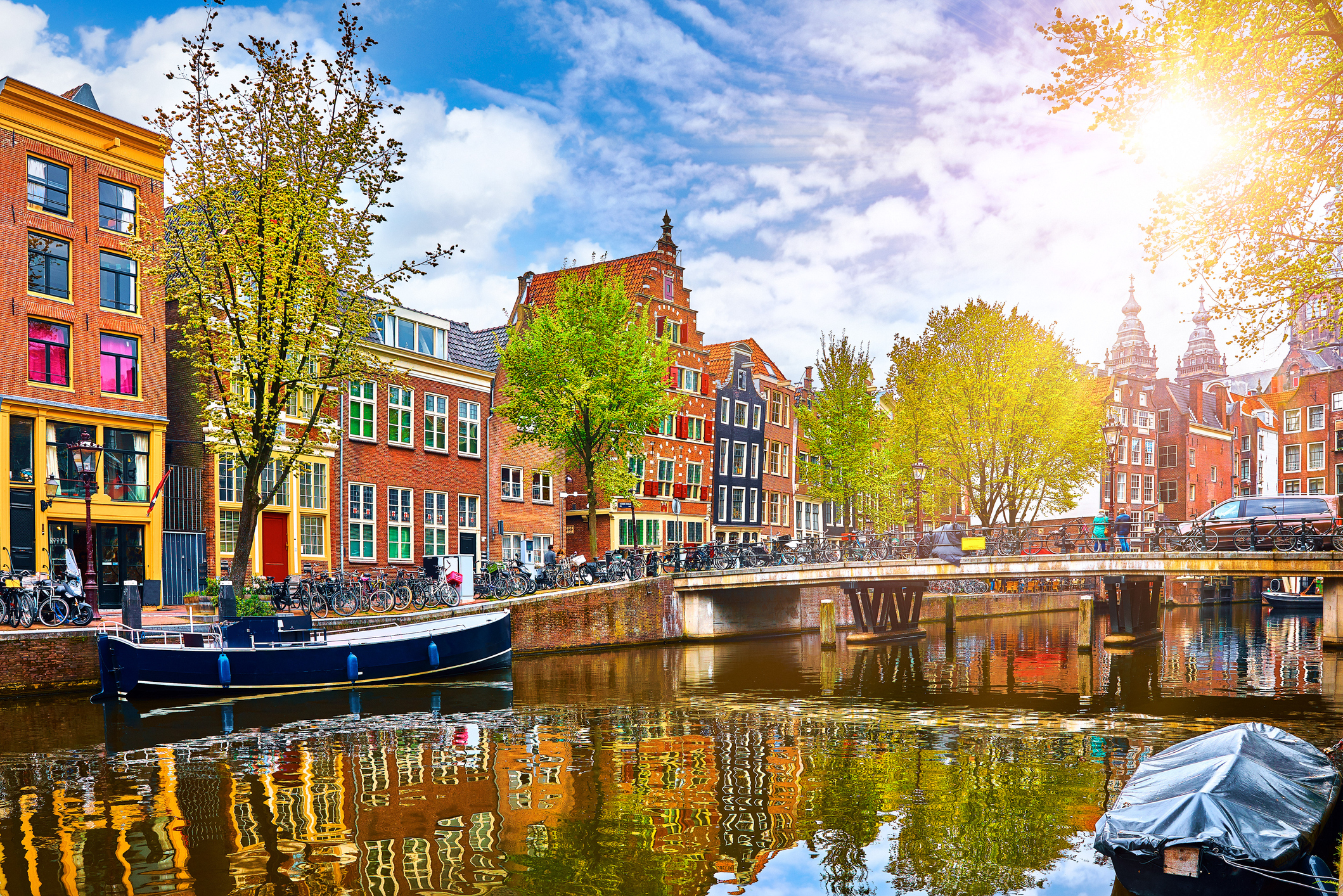 9 Reasons Why You’ll Never Get Bored of Amsterdam

Amsterdam is the kind of city you’ll never get bored of. With countless museums, free things to do, beautiful parks, cosy Dutch pubs and awesome nightlife, it’s the kind of place you can visit over and over again and each time you do, you’ll find a new favourite place. We’ve rounded up some of the best things about the compact city that keeps our Flying Pig customers returning. Whether you’re a party animal, a culture vulture, a keen cyclist or just a backpacker on a budget looking for a cheap city break, here are 9 reasons you’ll never get bored of Amsterdam…

Need a hostel in Amsterdam? Check out Flying Pig

Want more? Here are 20 Things to do in Amsterdam in Your Twenties

While Amsterdam is famous for its Dutch waffles and pancakes, there’s so much more to the city’s food scene than it’s traditional staple dishes. The city excels when it comes to street food, vegan food, international cuisine and tasty cheap eats. Whether you’re after the city’s best affordable sushi, a filling brunch, dim sum to share, Chinese food or a giant pizza, Amsterdam has you covered.

The street food markets dotted around the city are so worth checking out. We recommend Foodhallen and Albert Cuypmarket where you can try traditional Dutch specialties like bitterballen and raw herring, as well as street food from around the world.

And while you’re in Amsterdam you have to try some traditional home cooked Dutch cuisine at a cosy pub or restaurant. We know all the best affordable ones!

8 Dutch Foods You Need to Try in Amsterdam

Amsterdam’s live music venues and nightclubs are some of the best party spots in Europe. If you’re visiting the city for a good time, you’re guaranteed a blast if you go to the right places. From the coolest pubs and bars in Amsterdam, to the best dance clubs and live music venues, we have you covered on all the best places to party. Top tip: after pre-drinks at the hostel bar, head to Leidseplein Square, the hub of Amsterdam’s nightlife scene where you’ll find a buzzing atmosphere and plenty of clubs and bars to enjoy. You should also check what live music gigs are on while you’re in the city as venues like Paradiso and Melkweg are so much fun on a night out and the perfect place for house heads to pump their fists until the early hours of the morning. Whether you want a nice sophisticated bar to drink cocktails, an intimate live gig or a full on rave, this city has got it all.

Best Things to do in and around Leidseplein Square

5 Coolest Pubs and Bars in Amsterdam

Dutch beer is one of our favourite things about Amsterdam. There are so many beer bars, beer gardens and traditional Dutch pubs and breweries where you can enjoy a pint of the golden stuff. Famous Dutch beers include Heineken, Amstel, Brandt and Skol but you’ll also find many tasty Belgium and Trappist beers in the city’s bars too. The beer culture is prominent in Amsterdam and if you consider yourself a beer lover, then you’re spoilt for choice in the city. In the summer, enjoy the city’s best beer gardens when the sun is shining. Pay a trip to the Heineken Experience or visit Brouwerij 't IJ, a famous brewery next to a Dutch windmill where you can sample organic blonde and dark beers.

Check out the Best Beer Gardens in Amsterdam

Amsterdam knows how to throw big events and parties but the best has to be King’s Day. Taking place every year on 27th April, King’s Day is a massive Dutch celebration that takes place on the city’s streets and canals. It’s a national holiday to mark the birth of King Willem-Alexander and everyone wears orange! Get on a party boat, get tickets to the King’s Day festival or drink in the local bars before partying late into the night. Once you’ve experienced one King’s Day, you’ll want to go back every year - it’s a blast.

And it’s not just King’s Day you should travel to Amsterdam for. The city’s music festivals throughout the summer months are incredible. From the DGTL festival, Awakenings to Mystic Garden and Milkshake, these are the best music festivals to attend in summer…

Check out our Guide to King’s Day

The Best Music Festivals in Amsterdam

While some may think Amsterdam is concrete jungle separated by canals, it’s actually home to a lot of beautiful parks and gardens. 30 parks to be precise! When you need to escape the hustle and bustle, Amstedam’s parks are the perfect place to chill out, smoke and hang out with friends. The Flying Pig Uptown hostel overlooks Vondelpark which is open all year round and covers 47 hectares. Boasting trees, ponds and beautiful flowers, Vondelpark is the largest park in Amsterdam where you can take a nice walk or cycle beneath the trees. In the summer months, you’re allowed to light up a BBQ at some parks in the city such as Oosterpark or Amsterdamse Bos. Hortus Botanicus, Amsterdam’s amazing botanical garden is also worth a visit if you love nature.

If you consider yourself a bit of a culture buff, then Amsterdam is going to heaven for you. The capital city was once home to several famous Dutch artists and painters whose work is now displayed in some of the best museums and art galleries in Amsterdam. Museumplein is the place to go, which is home to three major museums showcasing the works of Dutch masters as well as contemporary art. The Dutch Masters are painters who created masterpieces during the Golden Age (around the 17th century) including the likes of Rembrandt, Jan Steel, Frans Hals, Vermeer and Bosch. The Rijksmuseum, Van Gogh Museum and the Stedelijk museum can all be found in Museumplein where you can discover modern art against old.

The Anne Frank House is also a must! Learn more about the famous diarists life in hiding and explore the exact house where she used to live in fear, hiding away from the Nazis.

Check out the Best Museums for Art and History

Everytime we visit Amsterdam, we never get bored of how picturesque it is. There are so many amazing photo spots in the city so you’ll be gutted if you don’t take any pictures. From the narrow houses of Damrak to the stretching canals of Jordaan, the Instagrammable places in the city are countless. In spring, you have to pay a trip to Keukenhof Gardens where the colourful tulips and in full bloom. The A’dam Lookout in Amsterdam Noord is priceless where you can get 360 degree panoramic views of the city.

These are the 17 Best Photo Spots in Amsterdam

Whether you’re a confident cyclist or not, Amsterdam’s streets are made to be cycled on. The whole city loves cycling and the cycle paths are some of the best in Europe. Safe for any level of bike rider, there are some amazing countryside day trips you can take out of the city on two wheels where you can explore some smaller Dutch villages on route. The trip to Zandaam for example is simply breathtaking. If you’d like to cycle from sight to sight in Amsterdam rather than walk or talk public transport, hire a bike from Black Bikes (the cheapest rates in the city) and get around Amsterdam like the locals do.

Most people visit Amsterdam and stick to the heart of the city - and while areas like Jordaan, The Red Light District and Museumplein are simply beautiful, there’s so much more of Amsterdam to explore. So don’t just stick to the city centre. Some of the coolest neighbourhoods are just a short journey away and there is so much to see and do once you start exploring the different districts. Go to De Pijp for the trendy cafes and restaurants, Amsterdam Noord for an industrial hipster vibe and urban beach, and Amsterdam Oost for the spacious streets and beautiful green spaces.

These are the Coolest Neighbourhoods to Visit in Amsterdam

A Guide to De Pijp

A Guide to Amsterdam Noord