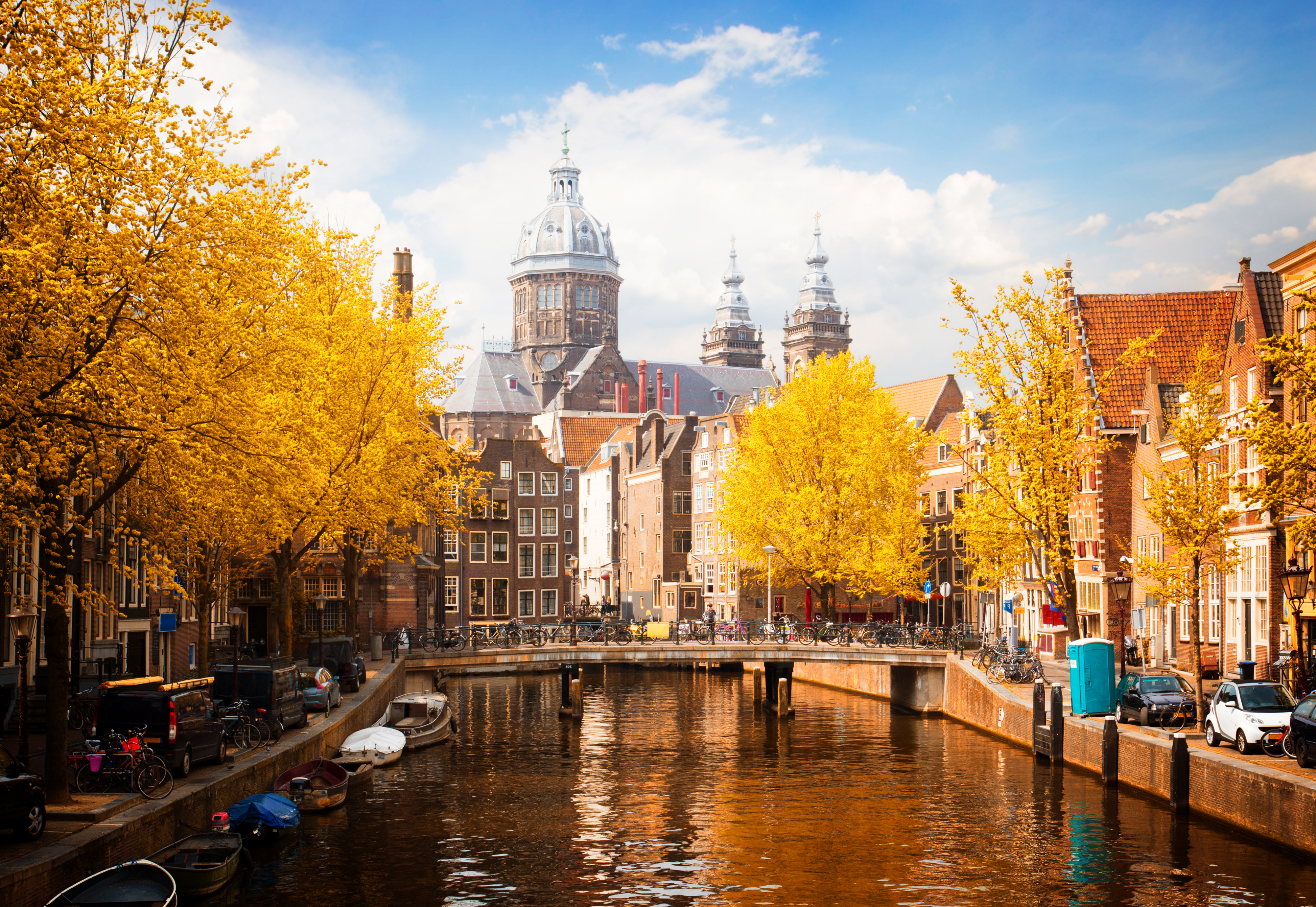 Best Things to do in Amsterdam in Autumn

We all know the city’s awesome at any time of year, but autumn in Amsterdam is something else. Dig out your wooly jumpers, hop on a bike and cycle through the rusty orange Vondelpark, escape the end of year chill and explore the museums, and make the most of some of Amsterdam’s best events on the calendar. For the photographers amongst you, there’s nothing like the orange tree-lined canals in Amsterdam’s cosiest months of the year. For the foodies, some of the tastiest Dutch delicacies are at their prime. Then for party-goers, Halloween in Amsterdam is on another level - plus it’s ADE month in October. Check out these seasonal things to do in Amsterdam this autumn that you can’t miss…

Need a hostel in Amsterdam? Book a bed at one of The Flying Pig hostels, both in prime location

When the trees lining the canals turn orange, there’s nothing quite like it. The branches hang over the water and canal boats float past under the orange haze giving the most insane photo opportunities. Either hop on a bike and ride up and down the canals, buy tickets for a canal tour or hire your own boat. Otherwise, find a cosy canalside pub and set up camp there for an afternoon of looking out on one of the best Amsterdam views of the year.

Dutch cuisine is more than just raw herring from a street food cart, and when it hits the colder months it just gets tastier and tastier. If you’re in Amsterdam for autumn or winter, order yourself stamppot from a local Dutch restaurant - that’s potato and vegetable mash with a smoked sausage on top. Then there’s apple pie. Who doesn’t love hot, spiced apple pie in autumn? Apples in the Netherlands are in their prime during autumn, which means Dutch ‘appeltaart’ is everywhere and even more delicious than it already was (although Winkel 43 does it the best).

Oliebollen is another autumn/winter Dutch delicacy, and one you won’t be able to get at any other time of year. The sweet balls of deep-fried dough - some with raisins, some without - are served all over the Netherlands from food vendors. Don’t miss it when in Amsterdam in autumn.

Amsterdam is one of the best cities in Europe for history buffs. Home to the world-class Rijksmuseum, the largest collection of Van Gogh artwork at the Van Gogh Museum and the heart wrenching yet totally unmissable Anne Frank House. In the autumn, when it gets a bit too cold to spend your entire days outside, head to a museum to see Amsterdam’s cultural side and escape the chill. In autumn, on 2nd and 3rd November, there’s even a Museum Night Festival in Amsterdam where you can explore over 50 of the city’s best museums after dark.

Check out the Best Museums in Amsterdam for History Buffs

Crunch your way through the fallen autumn leaves in Vondelpark on two wheels. Hire a bike and make the most of being in the same city as one of the most loved parks in Europe. Vondelpark turns a vibrant shade of yellow-orange between October and November, making it even more of a photography hotspot. Take a leisurely ride along the maze-like paths, weaving between trees - it’s a seriously easy route so if you’re a biking beginner then it’s the ideal place to start.

…And on to Amsterdamse Bos

Make a day of your bike ride and carry on to Amsterdamse Bos (that’s Amsterdam Forest in English), just outside the main city. It’s only a 20 minute cycle from the end of Vondelpark to the start of the forest, so it’s still a pretty simple route, however it’s worth noting that Amsterdamse Bos is WAY bigger. Autumn in there is magical, especially if you get there for when the leaves are at their brightest orange. There are countless photogenic parts of the forest with rivers, cheese farms, an old-school tram and way more things going on throughout the year.

The world famous Amsterdam Dance Event is an autumn must. It’s the biggest event of the season, bringing about 300,000 people into the city every year and it’s always epic. From 16th to 20th August Amsterdam will basically turn into one giant party, with over 200 venues across the city opening their doors to the biggest electronic music fans in over 1000 events. Last year was a record breaker, but this year’s set to be even bigger and better than ever. Book a room at the Flying Pig Uptown or Downtown so you can live and breath electronic music along with the rest of Amsterdam with a bed just around the corner.

Halloween is a big thing in Amsterdam. The city loves it! Expect a huge Halloween festival with pubs, bars and clubs across Amsterdam hosting spooky themed parties, and scary screenings at some of the cinemas. If you’re in Amsterdam for Halloween this year, do your research before you arrive as you’ll need to buy tickets in advance for some of the biggest parties. You better get planning your costume now then…

Try out the in-season beers at Amsterdam’s best brewery, located in a windmill to the east of the city. At Brouwerij ‘t IJ you can buy a flight of 5 local beer tasters for just €10, so beer lovers can get a taste of the freshest, best quality brews in one of the beer capitals of the world. Take a seat outside if it’s not too cold and order a bit of local cheese and sausage to go with your tasters, or you could even book onto a brewery tour to get the full Brouwerij ‘t IJ experience. Some of their more regular brews are available to buy in local Dutch supermarkets, but it tastes even better straight from the tap so make the most of it and stay for at least a couple!

Head to a Flea Market

Make the most of the cool, dry autumn days and head to a flea market without the fear of not enough shade or frozen fingers as you sift through the goods. Amsterdam’s Flea Markets in autumn are great, as they're far less crowded with tourists and still packed with hidden gems. Waterlooplein is a bargain hunter’s dream, with over 300 stalls selling vintage clothing, jewellery, bric-a-brac and even bikes. Albert Cuyp is the most popular of Amsterdam’s flea markets, and for good reason so it’s definitely worth taking the time to check out.

Looking for the best hostels in Amsterdam? Check out the Flying Pigs