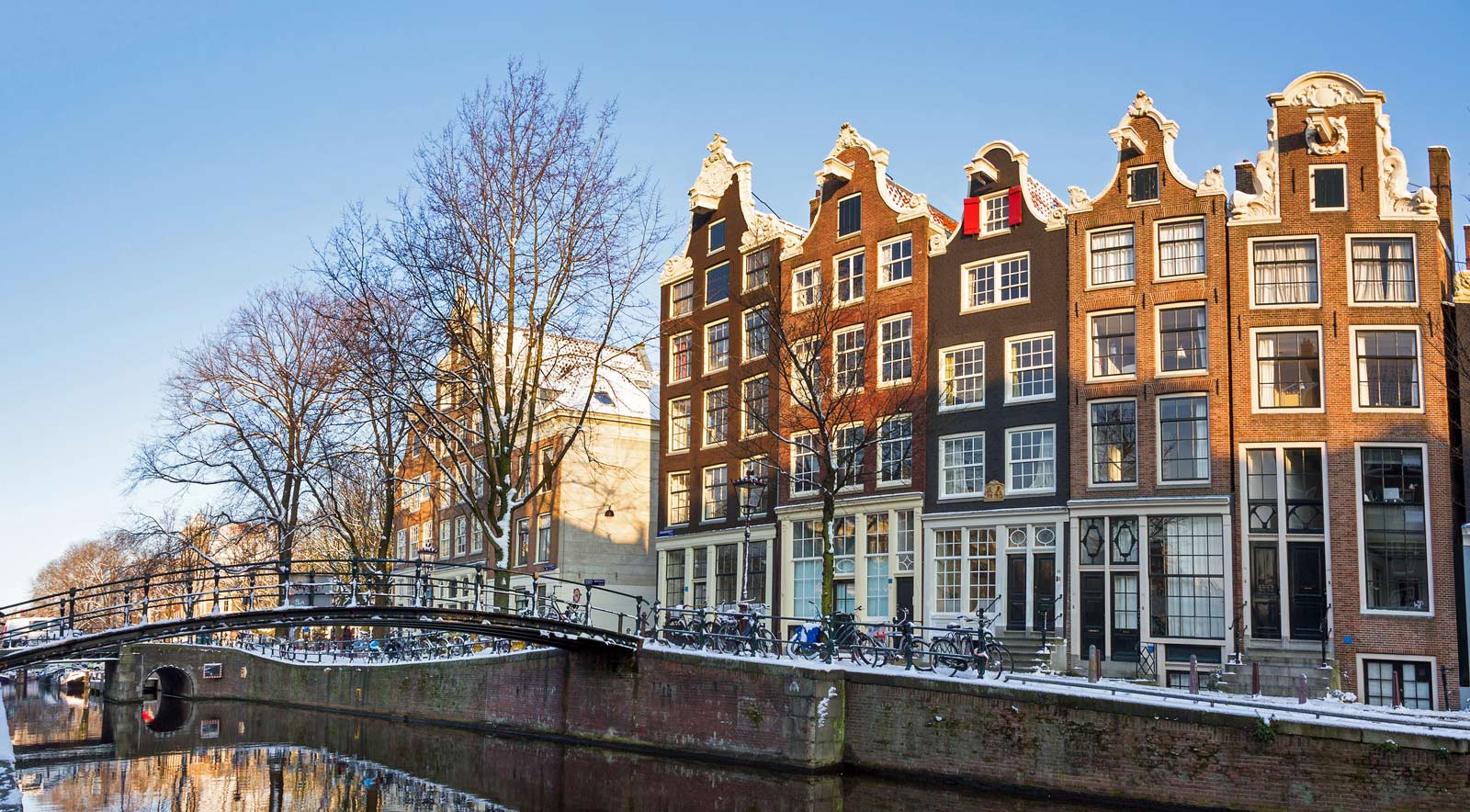 Amsterdam is simply beautiful at all times of the year, but in winter there’s a quaint seasonal charm about the city that makes it extra magical. Frosted canals, festive Christmas markets and colourful lights contribute to the electric city buzz that takes over the streets in the run up towards Christmas. If you’re visiting Amsterdam in the winter, be sure to take lots of amazing photos in some of the most photo-worthy places that only look this special during the festive season. We’ve rounded up the most Instagrammable city spots in winter whether it’s December, January or February! 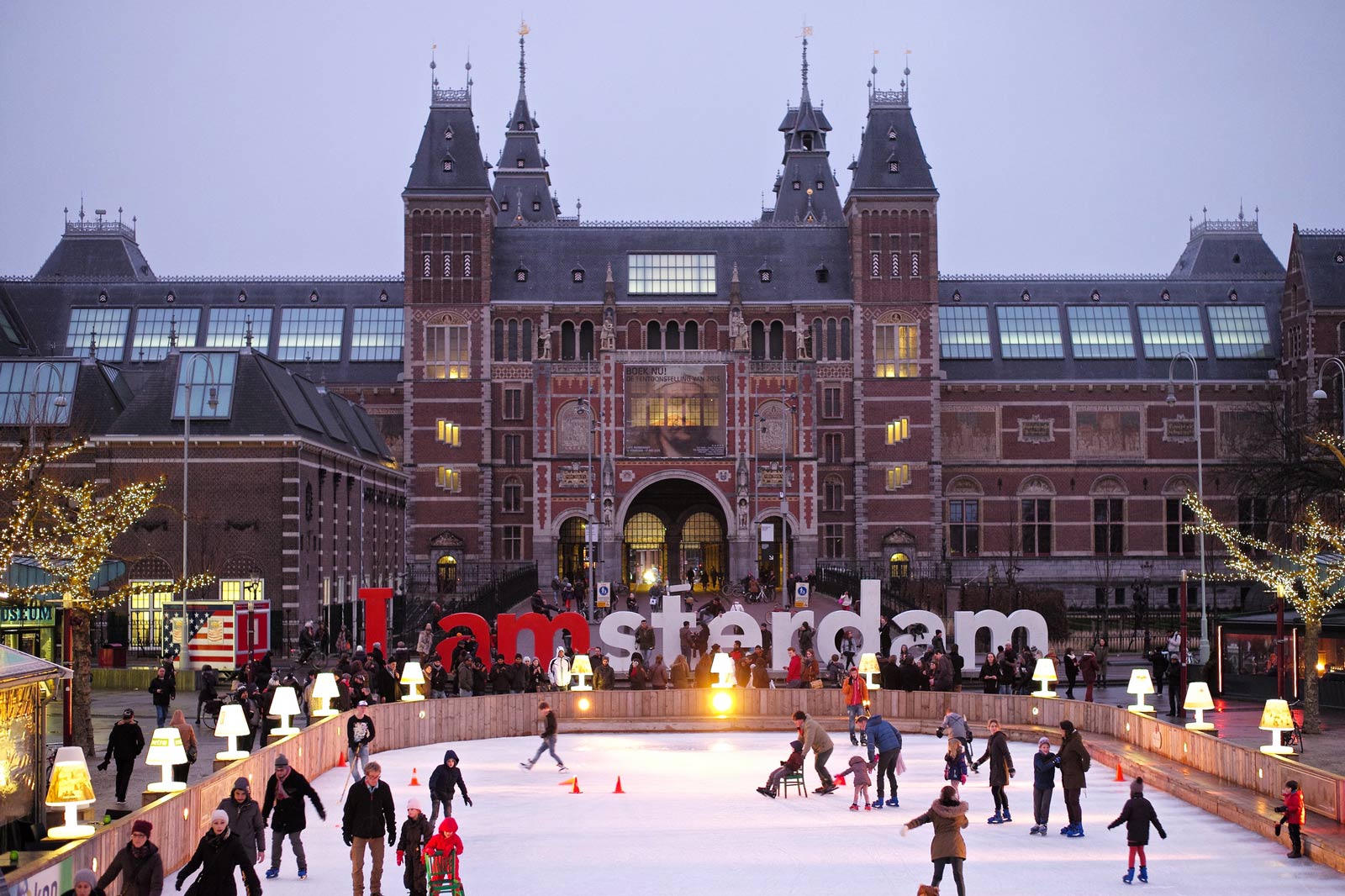 From November through to January a giant ice rink is laid out in front of the Rijksmuseum which is Amsterdam’s largest museum. Grab a pair of skates and celebrate in the best way possible when the temperature dips: on the ice! This is a great photo opportunity because the ice rink backs not only onto the fabulous museum but also the iconic I Amsterdam letters.

Cosy pubs and shops of Jordaan 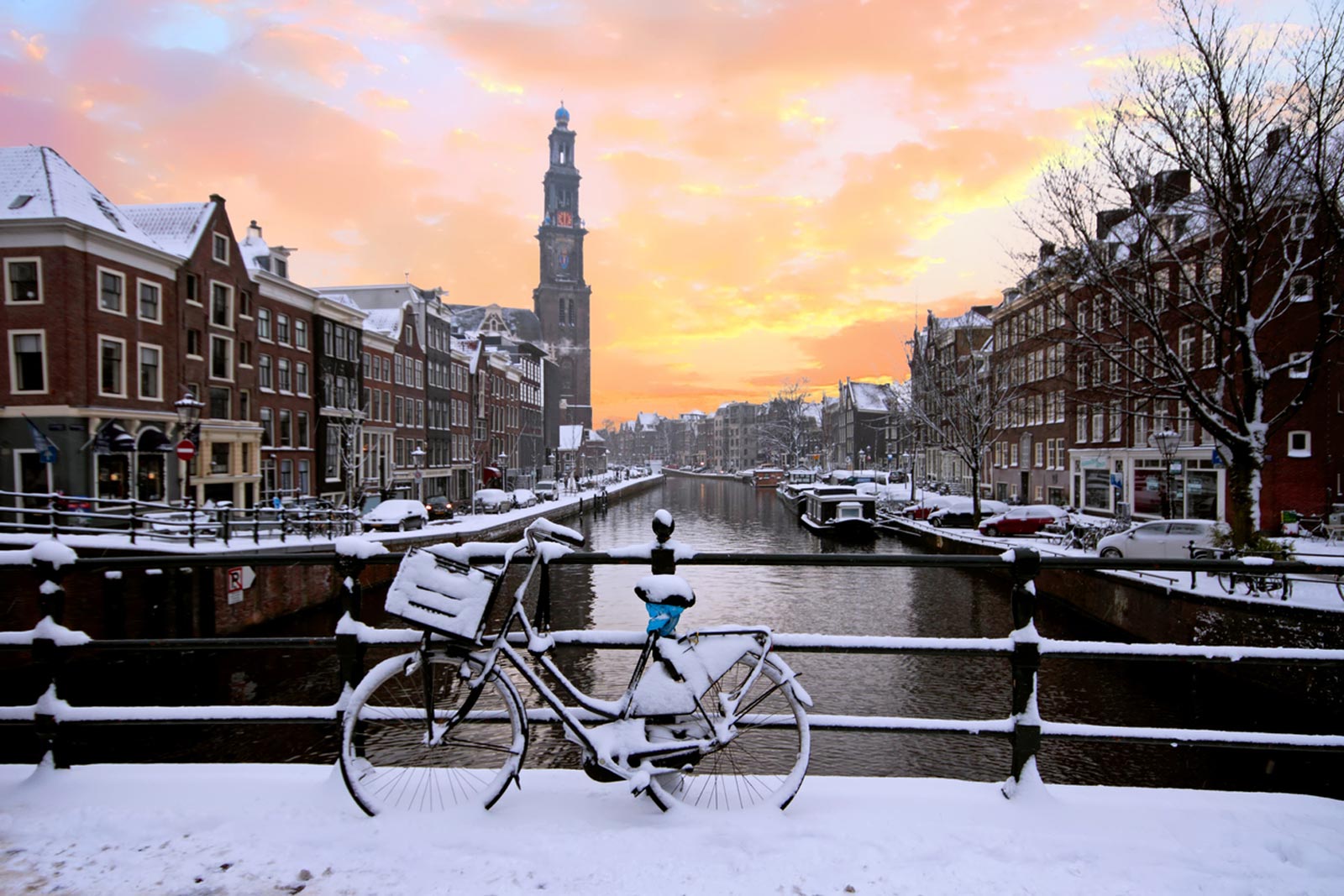 Filled with narrow houses and cosy streets, Jordaan is a trendy area in central Amsterdam that won’t let you down for Instagram opportunities. This charming neighbourhood becomes even more charming in winter with all of the inviting shopfronts, galleries, Dutch pubs and restaurants offering warmth when you need a break from the chill; the perfect excuse to eat more and drink more. Stop by at the Anne Frank House and afterwards find sanctuary indoors at Winkel 43 for a traditional (and very Instagrammable) Dutch Appeltaart. This warm cosy cafe will definitely provide you with photo ops.

The canals get icy 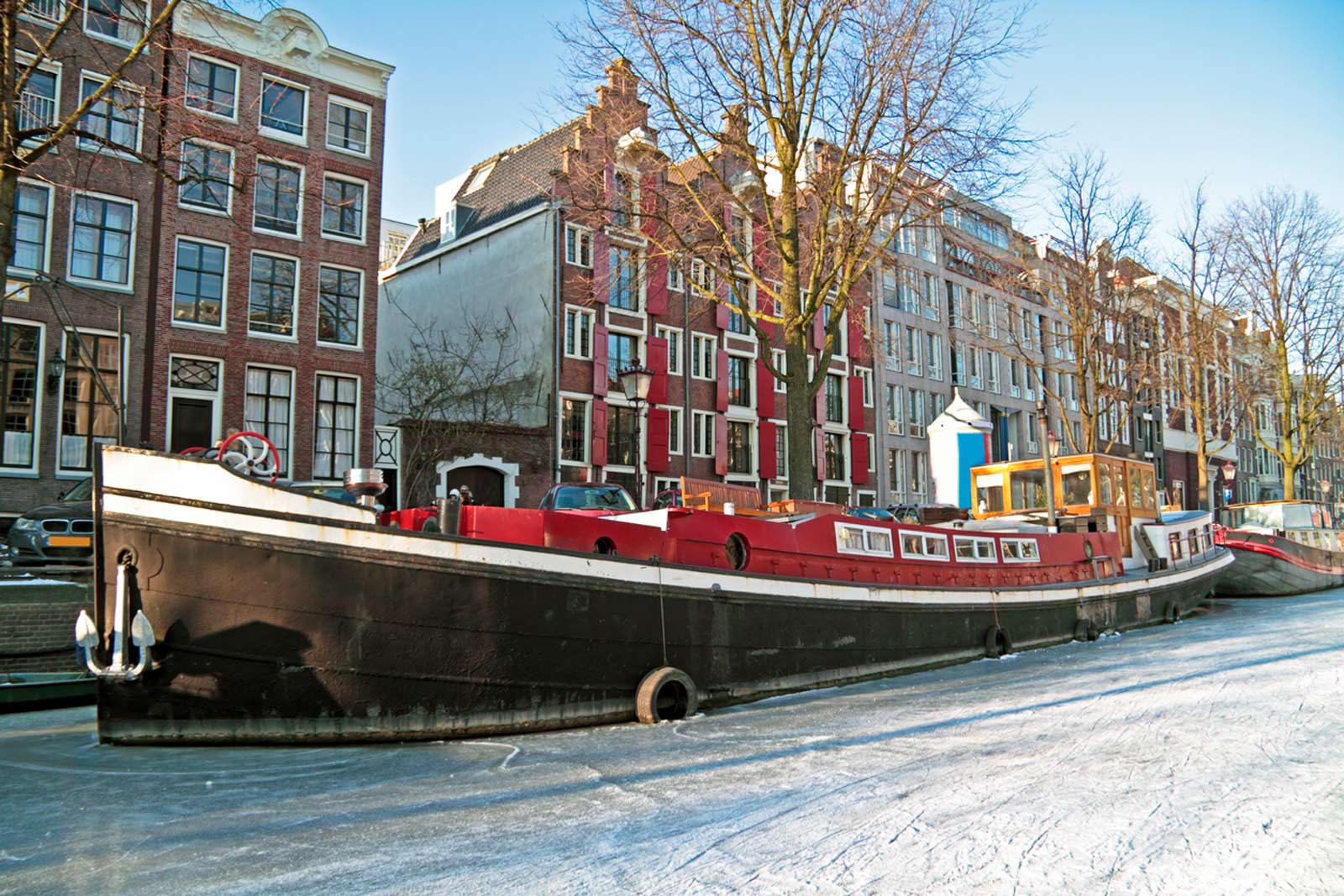 The canals of Amsterdam are a wonderful sight whatever time you come to the city but if you’re lucky enough to witness the lakes freezing over, that’s something you don’t see everyday so don’t forget your camera. Locals come together and get their ice skates to glide over the frosted water when it’s safe enough to. Head to Groenburgwal for a perfect photo of the canal with the Zuiderkerk, a beautiful Protestant church in view. 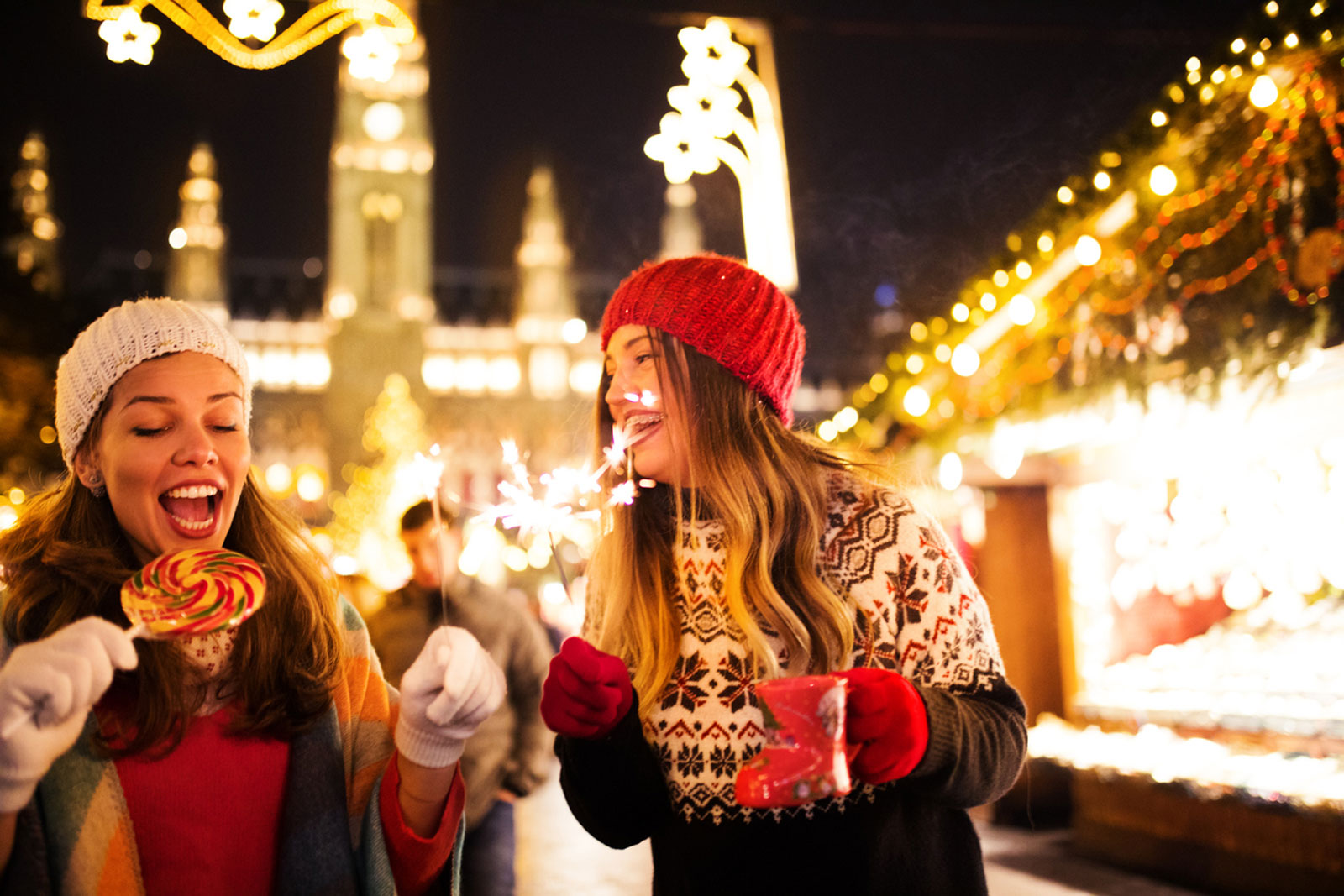 If you’re looking to capture some really festive photos on a trip to Amsterdam around Christmas time, then Christmas markets are one of the highlights of spending the holiday in Europe. In Amsterdam there are several places to go if you’re in search for heart fuzzing Christmas fun. Head to Dam Square to see the giant Christmas tree lit up by 40,000 energy efficient LED lights. Then head to one of the jolly Christmas markets and feast on hot Dutch waffles, mulled wine and sausages. There is the Ice Village on Museumplein or the RAI Christmas Market (which has turned into a giant winter wonderland). 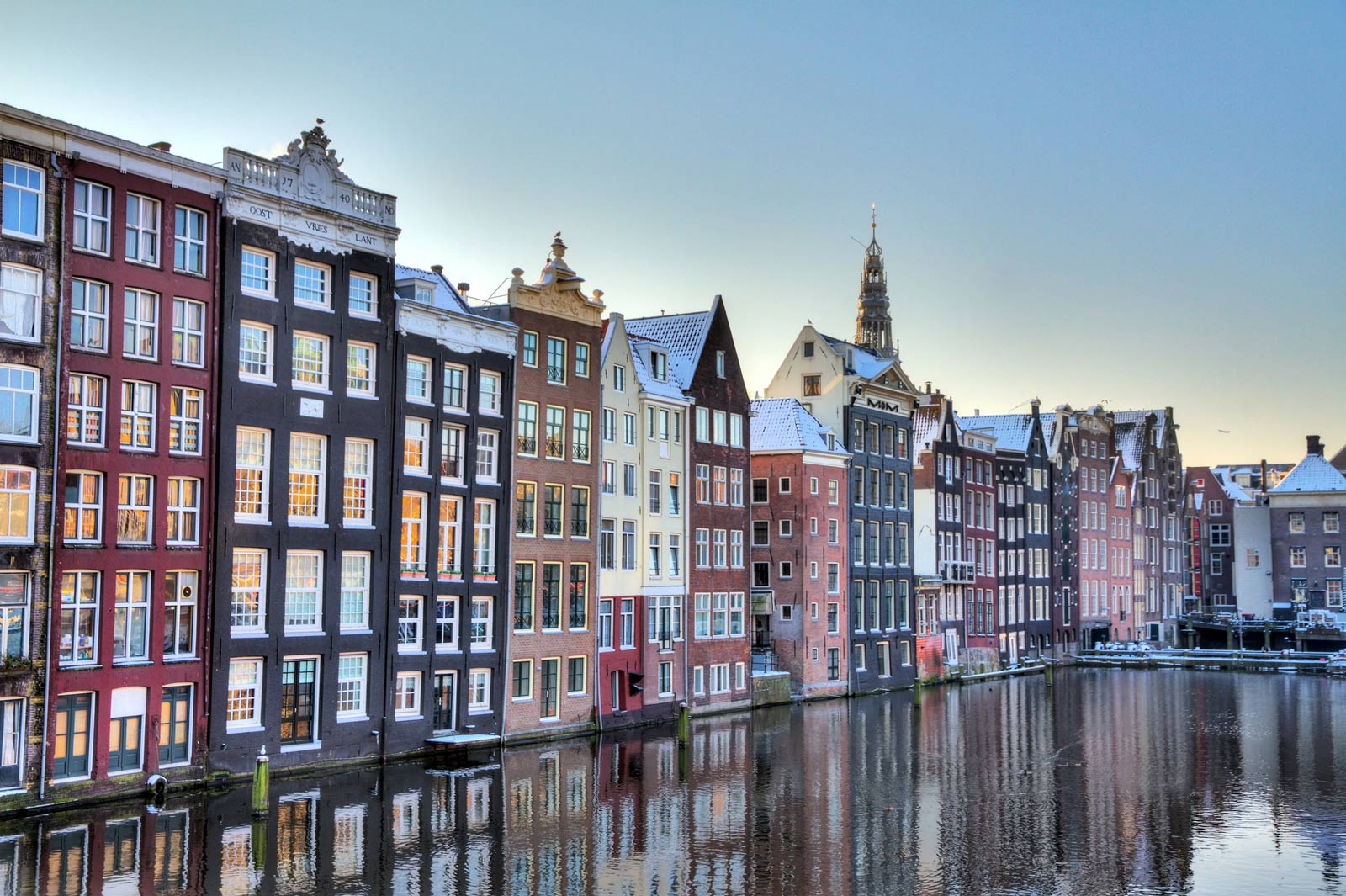 This has to be our favourite photo spot in the city and even more so during snow days where white powder blanket the rooftops of the houses of Damrak. These narrow coloured houses are iconic and recognised all over the world. Wrap up warm, get your winter coats and scarves on and get a wonderfully wintery photo outside these houses.

All of the lights! 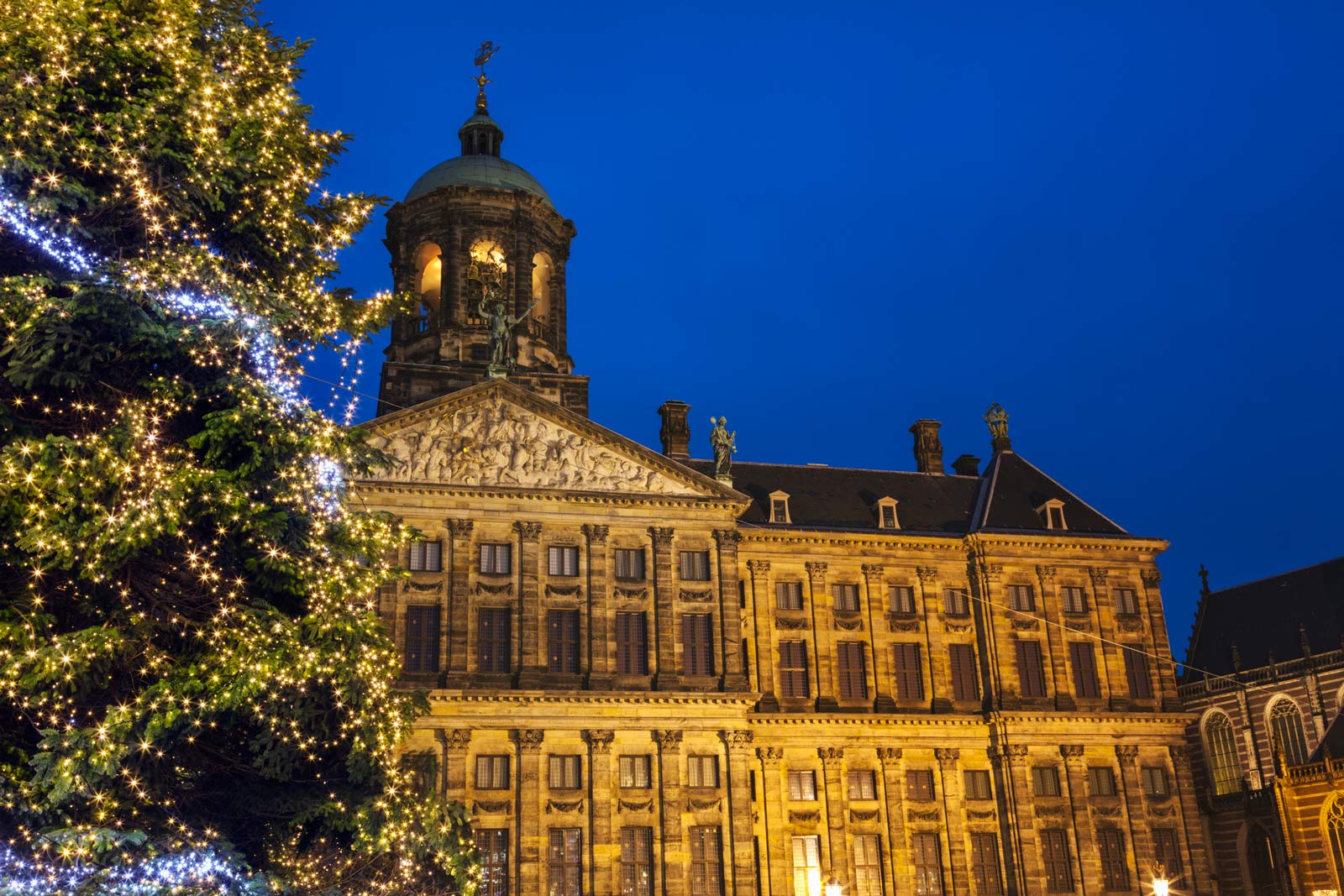 Amsterdam lights up for the festive season. The free event on Amsterdam’s Dam Square sees the illumination of hundreds of thousands of energy-efficient LED lights on the outside of the of the luxury department store, the Bijenkorf. Watch the lights switch on on the 15th November. Plus you’ll definitely want to take photos if you’re in Amsterdam during the Light Festival (29th November - 20th January) where you can witness 35 illuminated artwork creations in all their glory dotted around the city and its canals. Lights, camera, action! 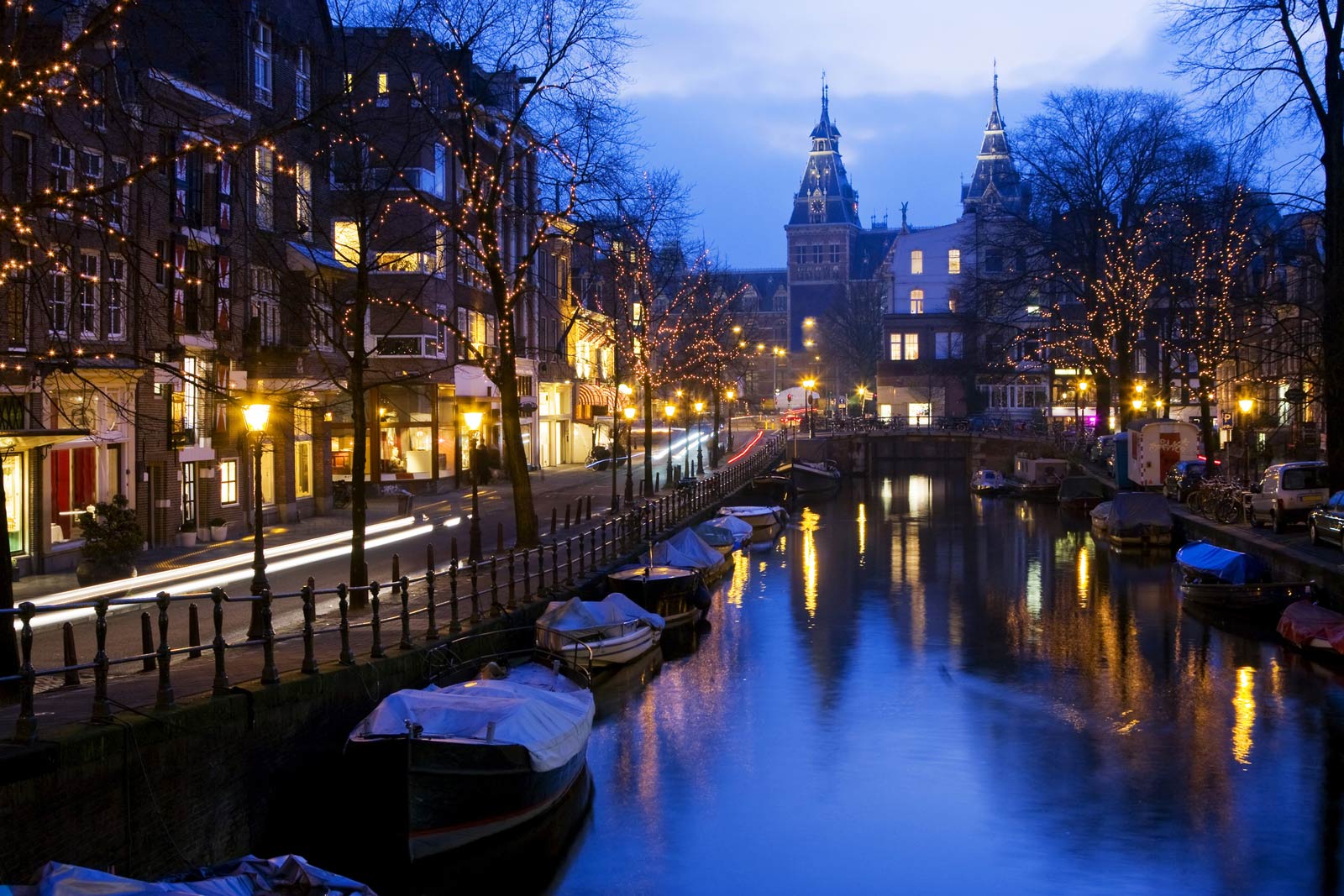 The trees lining the Red Light District are beautifully lit in winter and just as buzzing as always. The way the lights hit the water is simply stunning so it’s a perfect photo spot. Just be sure to wrap up warm as it gets cold at night!