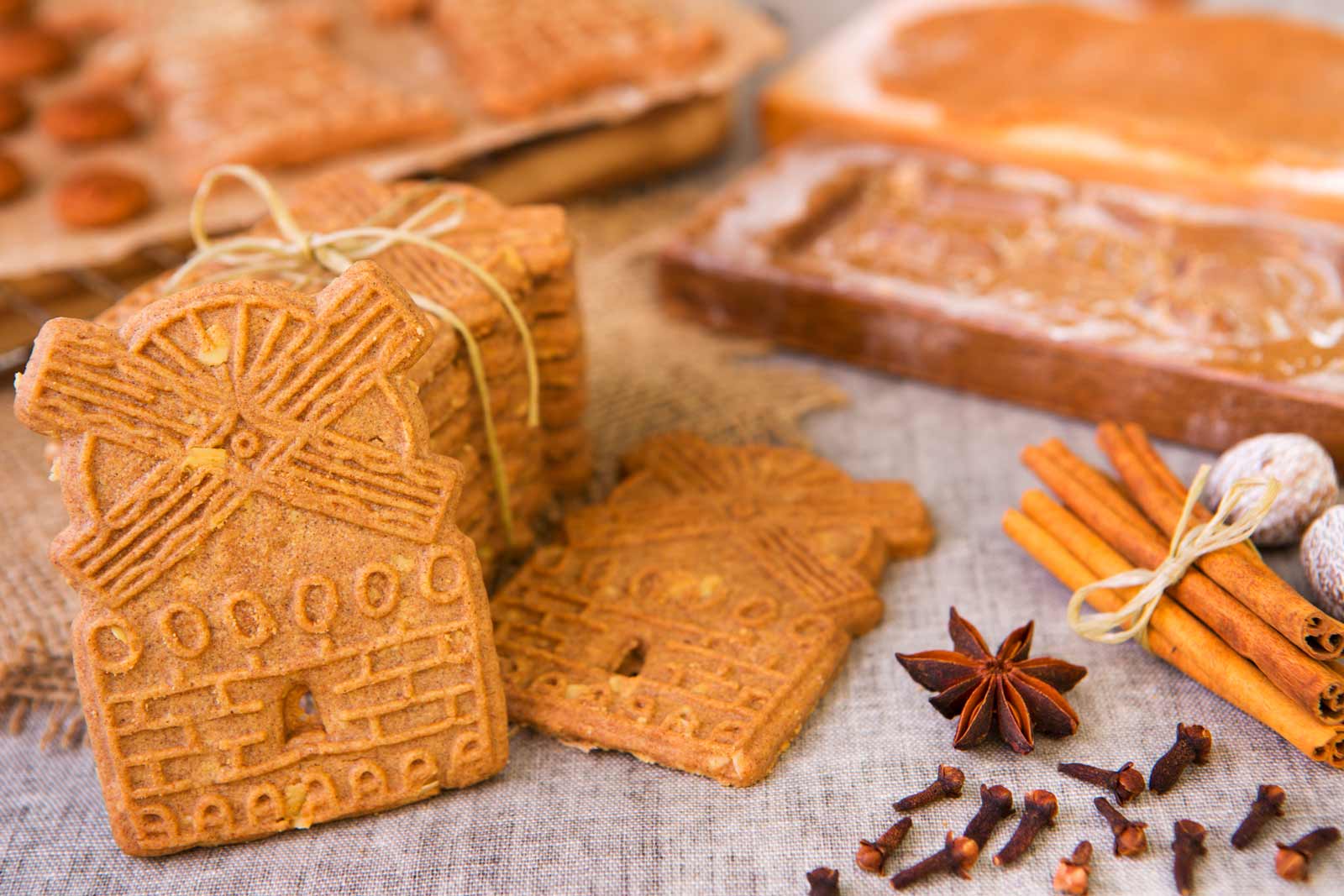 When it comes to food in Amsterdam at Christmas, it’s not so much about the big festive feast on the 25th but more sweet treats and spices throughout the season. The Dutch LOVE cookies at Christmas time. Made with all sorts of spices, filled with an almond paste or shaped in a festive fashion, the smell of these freshly baked Dutch Christmas cookies take over the streets and squares. When in Dam during Christmas festivities, make sure you try at least a few of these Dutch delicacies. Check them out, the 7 best things to eat in Amsterdam at Christmas. Let’s hope you have a sweet tooth…

Known to a lot of non-Dutch people as ‘windmill cookies’, speculaas is one of the most popular Christmas treats in Amsterdam. Proper Dutch speculaas should be thin, crisp, caramelized, a little spicy and made in a Christmassy shape or often like a windmill (hence the nickname). You’ll be able to sniff out the bakeries easily during the festive period, as they’ll all be baking their own complete with cinnamon, ginger, cloves, cardamom and nutmeg to give it that delicious Christmas flavour.

Gevulde speculaas is more of a cross between a speculaas cookie and a cake. The soft and perfectly spiced top and bottom layers sandwich a generous layer of sweet almond paste. A lot of people say that the speculaas spice is similar to that of American pumpkin pie, so if you’re a fan of that then there’s no doubting you should enjoy a delicious Dutch gevulde speculaas at Christmas.

This is the Dutch version of gluhwein or mulled wine. To be honest, there’s not a lot of difference between this and a mulled wine you’ve had before, just hot red wine mixed with orange, lemon, cinnamon, cloves and sweetened up with some sugar. It’s a classic Christmas tipple that’ll be served in any Christmas market in Amsterdam or at the homes of locals.

As far as Christmas dinner goes in the Netherlands, most families have their own tradition whether it’s turkey, cold meats or what they call ‘gourmetten’. This is similar to a raclette or fondue style meal, where you cook your meat and vegetables yourself around the dinner table on a hot pan. It’s a great way to get the family involved and a fun way to eat dinner whether it’s Christmas or not! If you’re in Amsterdam during the festive season, find a restaurant that does gourmetten to get a real taste of traditional Dutch Christmas.

Oliebollen is a traditional Dutch treat made mainly for New Year’s Eve than Christmas, but we wanted to include it anyway as it’s a major game player in the winter snack category. They’re made from dough and are usually packed with raisins, sultanas or currants and deep fried to perfection. Get them from street food stands, Dutch bakeries and Christmas markets on and around New Year’s Eve - locals believe if you indulge in one of these then the evil spirits will flee!

They may slightly resemble dog treats, but these tiny crunchy cookies are a Christmas classic! Traditionally made to eat on December 5th, the day of Sinterklaas, kids with their parents bake pepernoten all autumn through to December because they are SO easy to make. Using the same spice as speculaas to give it that extra zing, the only other ingredients are flour, sugar, butter, milk and a pinch of salt.

The final Dutch Christmas sweet treat and the final item on this list is the popular kerststol, eaten with a coffee for Christmas Day breakfast. It’s a bread made up on dried, alcoholic fruits, vanilla, cinnamon, ginger and stuffed with an almond paste to give it a sweet, delicious bite!