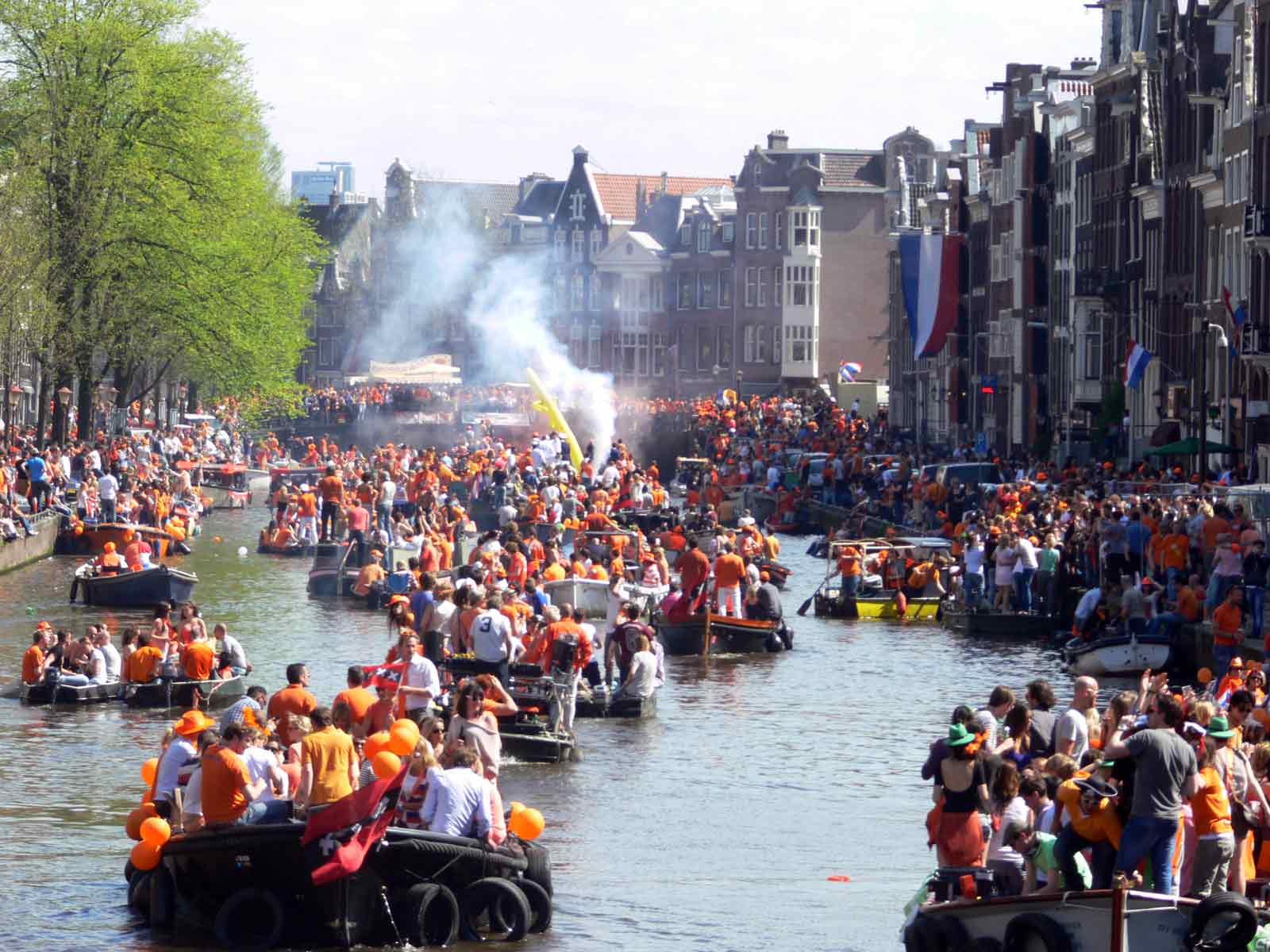 Who doesn’t love a crazy street party? Especially when it comes with booze, boats and banging music? King’s Day is by far the biggest and best day on the Amsterdam calendar. On the 27th April, over a million party-goers from the Netherlands and beyond will head to the Dam to celebrate the King’s birthday in Dutch style.

With concerts, market stalls and parties on pretty much every boat cruising the canals, it’s no wonder people come from all over to join the fun. Are you in?

Need a bed in Amsterdam for King’s Day? Check out The Flying Pig hostels (a fun place to meet new people who are also coming to party for King’s Day)…

Arrive a day early. Everyone goes out on King’s Night (the night before) to party, and then keeps on going the next day. Belushi’s, Melkweg, Chicago and Paradiso plus more of Amsterdam’s most buzzing venues will be throwing an epic King’s Night bash. Head to Belushi’s for orange cocktail buckets, face painters, live DJ’s and drink specials.

If you arrive on Kings Day or plan to leave the city that day, check the train schedules and which stations are operating trains to and from the airport. Less trains will be coming in and out of Amsterdam Centraal on the big day to control the flow of people around the city.

Orange is the colour of King’s Day because it’s the national colour of the Netherlands. Wear the patriotic colour with pride. If you don't have anything orange don't you worry, there’ll be plenty of opportunities to find something from one of the many street stalls.

Be organised and plan to meet your mates at a set place and time. Battling through the crowds in the Jordaan will be a mission while trying to locate your friends in a sea of orange. Phone networks can also be dodgy due to so many people using them.

Plan ahead and check out what's happening in the city and where. There will be loads of outdoor festivals happening around Amsterdam but as the day goes on making your way from one part of the city to another can become tricky - so create a rough itinerary so you’re not making it harder for yourself.

Most street parties tend to end at around 8pm and that’s when everybody moves on to the city’s clubs and bars.

When you gotta break the seal, expect to have to hold it. There’ll be extra public toilets out on the streets and many people even open their houses and local businesses to let you in and pee for a price. Usually 50c or 1 euro. When you gotta go, you gotta go.

Party on a boat! On King’s Day you’ll be invited onto plenty of boats. ALWAYS say yes! Unless your gut is telling you no, obviously.) You’ve got to experience King’s Day from the canal. Boat parties will pack out the waterways although many small boats don't have toilets so if you find yourself on a boat and need to pee keep an eye out for the plasboot (‘pee boat’). You can bring your own food and drink on the boat too.

Or, you can rent a boat for you and your pals (although it’s a lil’ on the pricey side).

Keep your cups! You can drink beer on the street but if you buy a beer from one of the many stalls there’s a deposit on the cup so hand it back over when you buy your next beer.

Bring enough cash with you as lines for the ATMs are no joke. They’re also known to run out of money on King’s Day.

Remember that public transport routes change on King’s Day and traffic will be diverted away from the city centre.

Although you’ll easily find a street stall to buy your alcohol from, you’ll save a fair bit of dollar by buying your booze beforehand at a supermarket. It’s a known fact amongst locals that supermarket shelves on King’s Day will be emptied fast, so make sure you’re prepared and buy your drink a day or two beforehand.

11 For the best festival on King’s Day

For the craziest festival on King’s Day, don’t miss Kingsland. But you’d better get your tickets before it’s too late. This will be the biggest and best festival in Amsterdam with an incredible line-up taking the stage including DJ Snake and Lost Frequencies. Ticket prices range from €32,70-€ 74,20.

It’s set to be epic.

Check out the Kingsland Festival on King’s Day

Need a bed in Amsterdam for King’s Day? Check out our hostels: